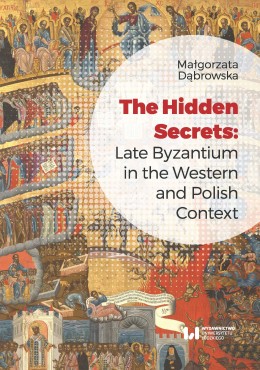 The Hidden Secrets: Late Byzantium in the Western and Polish Context

Professor Małgorzata Dąbrowska, a distinguished scholar dealing with the history of Byzantium in the Middle Ages, belongs to the few Byzantinists who have become internationally acclaimed. A considerable part of her output concerns Polish-Byzantine relations which are hardly known to foreign scholars because of the language barrier, and yet they attract the interest of scholars all over the world as a new aspect of Byzantine studies. The publication of English and French works by Małgorzata Dąbrowska will thus facilitate better understanding between the Latin and Orthodox milieux in the European world. The author’s style is absolutely superb, regardless of the fact whether her texts are written in Polish or in other languages. This adds another quality to her oeuvre.

From the review by Professor Maciej Salamon

Professor Małgorzata Dąbrowska holds a special place among the Polish Byzantinists as an outstanding specialist in the history of late Byzantium and its relations with Europe (including Poland, which is, undoubtedly, worth attention). The current collection of articles can be seen as a detailed sequel to the author’s monographs Byzantium, France and the Holy See in the Second Half of the 13th Century and The Latin Ladies on the Bosporos. Byzantine­Latin Marriages in the Imperial Family of the Palaiologoi (13th-15th Centuries). Both titles reflect faithfully the author’s favourite and interrelated subjects of study, namely the relations between Byzantium and western Europe, especially the matrimonial policy, which is handled in a detailed and innovative way.

From the review by Professor Jerzy Strzelczyk

CHAPTER ONE. The Palaiologoi Themselves and Their Western Connections 13
L’attitude probyzantine de Saint Louis et les opinions des sources françaises concernant cette question 15
Is There any Room on the Bosporus for a Latin Lady? 37
Byzantine Empresses’ Mediations in the Feud between the Palaiologoi (13th–15th Centuries) 53
Family Ethos at the Imperial Court of the Palaiologos in the Light of the Testimony by Theodore of Montferrat 69
Ought One to Marry? Manuel II Palaiologos’ Point of View 81
Sophia of Montferrat or the History of One Face 99
“Vasilissa, ergo gaude…” Cleopa Malatesta’s Byzantine CV 123
Hellenism at the Court of the Despots of Mistra in the First Half of the 15th Century 135
The Power of Virtue. The Case of the Last Palaiologoi 147
Le roi de France, aurait-il pu acheter Byzance? 163

CHAPTER TWO. Byzantium and the Polish Kingdom in 13th–15th Centuries 171
A Byzantine Lady’s Daughters in Poland 173
Peter of Cyprus and Casimir the Great in Cracow 183
Could Poland Have Reacted to the Submission of Byzantium to the Turks in 1372–1373? 195
Uzun Hasan’s Project of Alliance with the Polish King (1474) 211
From Poland to Tenedos. The Project of Using the Teutonic Order in the Fight against the Turks after the Fall of Constantinople 233
Cantacuzene – “The Wolf” or Matthias Stryjkowski’s Recollection of Byzantium 247