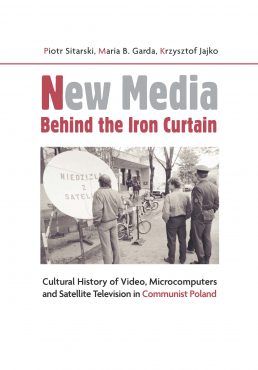 New Media Behind the Iron Curtain

During the years of the Polish People’s Republic, Poles were cut off from the western world. Travel was restricted, as was access to out- side culture and goods. This unique situation led to a period of great ingenuity in the realm of new media. Not only were media adapted to suit Poles’ needs, but new technology was fashioned to gain access to western television, film and video games. Bringing people together, VCRs, computers and satellite television were thus a window to the outside world and contemporary to the mobilisation of Solidarity and the end of communism. As such, their diffusion is an important but largely overlooked aspect of Poland’s history. Acutely aware of this, the authors of this book recount new media behind the Iron Curtain in a way that will appeal to scholars and non-academic readers alike. Coupling archival research with in depth interviews, they bring to life the talent and determination of the PPR’s new media pioneers, compelling others to dig further.

“One of the strengths of this book, which makes it such a delightful read, is the feeling of chaotic technical experimentation with objects and practices whose meaning has not yet been settled, in a context where the authorities tried to be controlling and restrictive but were mostly incapable of understanding what they should do in order to achieve this.”

– from the Foreword by Graeme Kirkpatrick

Piotr Sitarski, New Media and the fall of the Polish People’s Republic 15

Piotr Sitarski, Video in the Polish People’s Republic: technology and its users 49

Maria B. Garda, Microcomputing revolution in the Polish People’s Republic in the 1980s 111

Krzysztof Jajko, Television from the sky for everyone 171