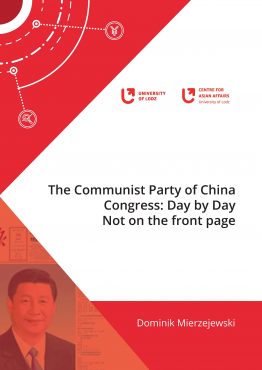 The Communist Party of China Congress: Day by Day

This volume is a collection of short day-by-day commentaries on the 20th Party Congress. As we know, Xi Jinping has cemented power and established his now unique place in the history of the Communist Party of China. However, the commentaries are not taken from the front pages of Chinese media outlets that were dominated by images and words of senior leaders and mainly Xi Jinping. The commentaries look at “People’s Daily” articles that discussed the Party Congress but not exclusively from the perspective of party members from the higher echelon.

THE PARTY CONGRESS DAY 1#
What can be learned from the editorial of “People’s Daily”? 9
Two major issues in the party report: redistribution of wealth and development and security 10

PARTY CONGRESS FINAL “PEOPlE’S DAILY” EDITORIAL#
The editorial chimes with the composition of the Standing Committee – a united struggle prevails. 25