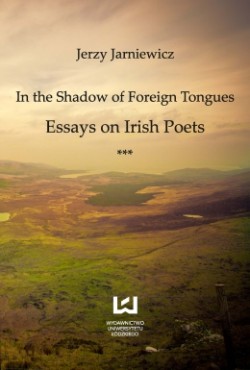 In the Shadow of Foreign Tongues. Essays on Irish Poets

The title of this book comes from James Joyce’s A Portrait of the Artist as a Young Man. In one of its most memorable fragments, Stephen Dedalus calls English an acquired speech, „so familiar and so foreign”, in whose shadow his soul frets. Today, English is no longer perceived as a foreign tongue in Ireland, but Joyce’s, or Stephen’s, formula seems to describe most accurately our understanding of any language, and especially of the language of poetry.

In the Shadow of Foreign Tongues includes eleven critical essays on the work of Louis MacNeice, Derek Mahon, Michael Longley, Seamus Heaney, Ciaran Carson, and Paul Muldoon, all poets from Northem Ireland who write in English. All, with the exception of MacNeice, belong to the two generations of post-war poets whose first books were published during the upsurge of the ‘Troubles’.

Jerzy Jarniewicz examines their relationship with various forms of „foreign tongues”, their thematic journeys abroad, their preoccupation with translation and dialogues with other poets, as well as their forays into other genres, such as prose or drama.

The work of the seven Irish poets discussed in these essays forms a zona media where the familiar meets with the foreign, the here with the elsewhere, the local with the cosmopolitan, the specific with the universal, the vemacular with the literary. Bringing to intemational Irish studies his Polish perspective, analytical intelligence and deep, contextual knowledge of the works he exarnines, Jarniewicz, poet, translator and literary critic, has written a lively and informative book which is a significant contribution to the critical reception of contemporary Irish poetry.