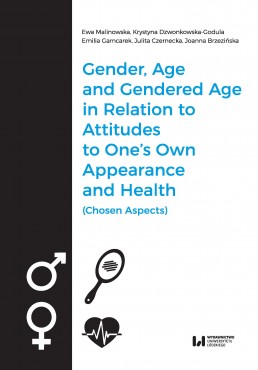 Gender, Age, and Gendered Age in Relation to Attitudes to One’s Own Appearance and Health

The book presents the influence of cultural factors on people’s attitudes towards their own health and appearance. lnnovative concept of hierarchical organization of gender and culturally detined age and their influence on each other applied in the study allowed for application of a new sociological category, i.e. gendered age. Such an approach gave an opportunity to conduct an in-depth analysis of beliefs, opinions and behaviours of men and women of different ages regarding their own appearance and health. The empirical part of the book presents definitions of femininity and masculinity used by people in different age groups young, middle-aged and elderly. There was also characterized the level of respondents’ awareness of the influence of gender, age and gendered age on their appearance and health. Moreover, the nowadays of growing importance concept of human capital was used, in which health and appearance are defined as its resources. The book enhances general knowledge about the gender determinants of social phenomena and falls into such fields as gender studies, gender sociology, sociology of the body and health. lt is addressed not only to scientists – sociologists, anthropologists, cultural scientists, psychologists or physicians, but also to people interested in the issues discussed.

Chapter 1. Theoretical and Methodological Introduction 11
1.1. Examining Attitudes Towards Health and Appearance from the Gender and Gendered Age Perspective Theoretical Concepts and Findings (Ewa Malinowska) 11
1.1.1. Cultural Models of Society, the Genderisation Process 11
1.1.2. Patriarchal Models of Gender 13
1.1.3. Gender in Relation to Health 16
1.1.4. The Concept of Gendered Age 17
1.1.5. The Framework Adopted in the Study of Attitudes 19
1.2. The Purpose, the Issues, and the Methodological Assumptions of the Study (Ewa Malinowska, Krystyna Dzwonkowska-Godula, Emilia Garncarek, Julita
Czernecka, Joanna Brzezińska) 21

Chapter 5. Attitudes of Men and Women of Different Age Towards Their Health 155
5.1. Cognitive Component 155
5.1.1. Reasons for Taking Care of One’s Health Given by Men and Women of Various Age (Emilia Garncarek) 155
5.2. Affective Component 169
5.2.1. The Evaluation of One’s Own Health in Relation to Gender and Age (Krystyna Dzwonkowska-Godula) 169
5.3. Behavioural Component 183
5.3.1. Pro-Health Behaviour and Gender (Emilia Garncarek) 183