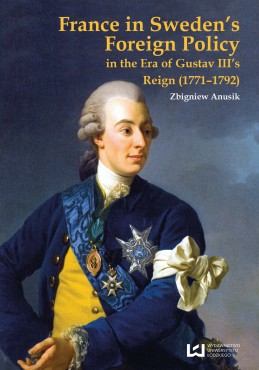 This book is about the Stockholm court’s policy on France during the reign of Gustav III. It is a work on the history of diplomacy based on an extensive source material. The author concentrates especially on the crisis of the French monarchy in the years 1787-1792. He also pays a lot of attention to Gustav III’s unsuccessful attempts to build an anti-French and anti-revolutionary coalition of European monarchs. The chronological range of work covers Gustav III’s reign, thus the death of that ruler on March 29, 1792 marks the end of the book.

Chapter 1. The Most Faithfull Ally of the Versailles Court: Gustav III’s Reign between 1771 and 1786 21
Prince Gustav and his relations with the court of Versailles 21
The party of the “Hats” regains its power 28
The beginnings of Gustav III’s reign 31
The monarchist coup d’état and the end of the “Age of Liberty” 36
Formal and legal basis of Gustav III’s reign after the August coup 42
Internal reforms in the spirit of the Enlightenment 46
Changes in the organisation of the Swedish diplomatic service 52
A foreign policy of Gustav III after the August coup 57
Gustav III’s attitude towards France between 1773 and 1776 62
Attempts at a rapprochement to the St. Petersburg court 68
The Riksdag of 1778–1779 and changes in the internal policy 71
A growing opposition against Gustav III’s reign: The Riksdag of 1786 77
Absolutist tendencies in Gustav III’s internal policy 80
An alliance with France against the court of Copenhagen: Gustav III’s foreign policy between 1778 and 1783 83
Searching a new ally: Gustav III’s foreign trip in the years 1783 and 1784 94
Against the St. Petersburg court: An anti-Russian Swedish policy of 1784–1786 99

Chapter 2. In the Face of the Approaching Storm: The Swedish-French Relations from January 1787 to May 1789 105
The Ambassador 105
Missed opportunities, lost illusions: The internal situation in France in the years 1774–1786 107
The Assembly of Notables: The origins of the opposition of the privileged 112
A guerrilla war between the monarchy and parliaments 118
The attitude of France and Sweden towards the events in Holland 130
France and Sweden towards the Russo-Turkish war 139
Gustav III in the years 1787–1788: The growing conflict with Russia 150
Beginnings of the Swedish-Russian war: The failure of Gustav III 163
The Danish invasion of Sweden: The king’s fight with the noble opposition 171
Between war and peace: Preparations for the campaign of 1789 178
The Ministry of Necker: The time before the first meeting of the Estates-General 181

Chapter 3. Growing Concern: Swedish Diplomacy Towards the Events in France from May 1789 to August 1790 187
From the Estates-General to the first reforms of the National Constituent Assembly 187
Gustav III in the face of the July events in France 197
A new reshuffle on the French political scene: The second disturbance of Paris people: The first attempt to explain mechanisms of a revolution 202
The Turin mission of the Baron von Rehausen 220
Around diplomacy and war: Politics of Gustav III in the period of the second Russian campaign 224
The Paris mission in the second half of 1789 228
Evert Taube and Hans Axel von Fersen 233
The internal situation and international position of France in the light of Staël von Holstein’s account (January–July 1790) 239
The campaign of 1790 and the peace with Russia 249

Chapter 4. First Attempts to Rescue the Royal Family: The Swedish Diplomacy Towards France from August 1790 to June 1791 257
At a crossroads: The foreign policy of Gustav III from August 1790 to May 1791 257
The Russian perspective: St. Petersburg mission of Curt von Stedingk 265
The revolution slows down: The situation in France from August to December 1790 271
The growing anxiety: The situation in France from January to May 1791 281
Louis XVI and the king’s first attempts to leave Paris 290
A trusted friend: Hans Axel von Fersen and his role in preparations for the royal family’s escape 293
Gustav III’s attitude towards the plans of Louis XVI’ escape 301

Chapter 5. The Failed Escape of Louis XVI and First Attempts to Organise the Anti-French Coalition (June–October 1791) 311
The Varennes affair and its consequences 311
Erik Magnus Staël von Holstein towards the French monarchy crisis 315
Gustav III in Aachen, first attempts to intervene in France 319
The Koblenz mission of Evert Taube and the Swedish diplomacy’s efforts to obtain the support of the German princes 331
The Austrian mission of Hans Axel von Fersen 335
The Swedish diplomacy’s efforts at the Madrid court 361
From the Paris perspective: French affairs described by Erik Magnus Staël von Holstein and Erik Bergstedt 368
The Swedish-Russian negotiations and St. Petersburg’s reaction to French events 382
A great hope of a counterrevolution: Gustav III’s actions from early August to mid-October 1791 388

Chapter 6. With Russia Against the Revolution: Swedish Diplomacy Towards France in the Period from the Late October 1791 to Late March 1792 401
France on the road to war with monarchical Europe 401
The efforts of Swedish diplomacy aimed to sign a subsidy treaty with the court of Madrid 429
The Koblenz mission of Carl Gustaf Oxenstierna 436
In the service of heart and head: The Brussels mission of Hans Axel von Fersen 456
Between fear and hope: The actions of Curt von Stedingk in St. Petersburg in the period from the end of October 1791 until the end of March 1792 485
A failed leader of a monarchical crusade: Gustav III in the last months of his life and reign 495