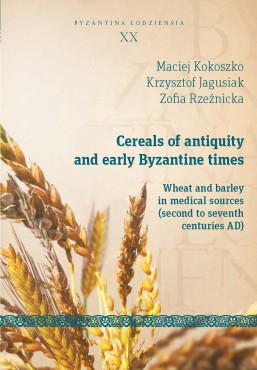 The present book aims at a detailed analysis of the evolution of dietetic doctrines and an assessment of the value of medical sources for historians of food. In order to achieve the goal, the authors have analysed select medical sources composed between the 2nd and the 7th centuries AD, i.e., treatises published from the moment of canonizing dietetic doctrine by Galen up to the composition of the medical encyclopaedia compiled by Paul of Aegina and the publication of the anonymous work entitled De cibis. Within this timeframe, there appeared a number of works which, following the assumptions of the Hippocratic school, contain a cohesive discourse devoted to the role of food in maintaining and restoring human health, thus allowing us to trace the development of diets during the period in question.

In order to conduct their research, the authors have selected a food group, namely cereals and cereal products, starting with common and durum wheat (and including in the research hulled wheats, i.e. einkorn, emmer and spelt) and finishing with barley, since all the above-mentioned crops constituted the basis of diet of the majority of peoples inhabiting the Mediterranean.

The high academic value of the reviewed book stems from many-years experience of Maciej Kokoszko, the founder of the research group, a scholar known in the academic circles throughout the World (…) He has chosen and introduced in the research young and talented students. The book shall be an achievement on the international scale… (prof. Maciej Salamon)

All the above-mentioned arguments speak for making the knowledge on the discussed subject available to a wider readers’ circles. Not only historians, byzantinists and classical philologists (…) shall be interested in the book, but also those scholars who survey and research culture sensu largo. It can be also of interest (at least as a historical curiosity) to pharmacists, physicians and homeopaths. Experts in medicine may well find in it inspiration to their research, or even verify the methods of the ancients. It should be noted that the restoring of the old, otherwise forgotten knowledge, may have its role in the progress of the modern scholarship, as it is not a mere scientifically useless rarity but might turn out to be a stone rejected by the builders, which could eventually form a cornerstone… (prof. Piotr Kochanek)