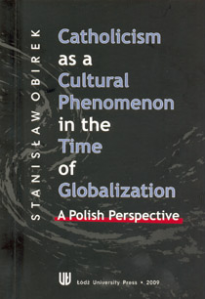 Catholicism as a Cultural Phenomenon in the Time of Globalization

„On the densely and richly populated Polish intellectual scene, Stanisław Obirek is one of the most prominent and significant, indeed outstanding actors. He stands out from the rest of actors for the role he designed and scripted for himself and has been consistently, over many years, performing; (…) a role that follows no ready-made scripts and lines, a role that Obirek originated and developed (…) and which it have succeeded by now to make an indispensable part of the Polish intellectual life.
One should be grateful to the publishers for collecting, (…) the manifold Obirek’s writings on the subjects ranging from the general condition of religion in contemporary world, through the problems related to the Church’s place and role in society (…). and up to the convoluted, intricate and puzzling case of the Polish-Jewish relation, which Stanisław Obirek is not the first Catholic tackling, but perhaps the first scholar attempting to approach it as a Catholic. One should be graleful to the publishers, as what they offer the readers is a genuine treasure-trove of fascinating findings, convincing interpretations and inspiring visions, which will most certainly earn a distinguished and durable place in the ongoing debates in Poland, but also all around our disunited yet struggling to unite planet.”

Preface – Prof. Zygmunt Bauman 5
I. General Perspectives 9
Chapter 1. The Catholic Church and Globalization 11
Chapter 2. Intellectuals and Catholicism in Today’s Poland 23
Chapter 3. Jesuits in Poland and Eastern Europe 35
Chapter 4. The Beginning of Catholic Higher Education in
the USA: The Case of Belarusian Jesuits 53
II. Poland After Communism 63
Chapter 5. The Impact of Communism on Culture and
Religion in Post-Communist Europe 65
Chapter 6. The Revenge of the “Victims” or About Polish
Catholics’ Difficulty with Democracy 79
Chapter 7. Distributive Justice: Aspects of Making
Democracy in Poland 87
III. Polish-Jewish Relations After the Holocaust 97
Chapter 8. Why do Polish Catholics Have Problems Facing
the Holocaust? 99
Chapter 9. Catholics, Jews and the Teachings of Abraham
Joshua Heschel 115
Chapter 10. Is Christology an Obstacle for Jewish Christian
Understanding? 127
Chapter 11. Christology as a Christian Form of Idolatry 135
Chapter 12. A Common Destiny: Why Jewish-Christian
Dialogue is Important to Me? 147
Chapter 13. Between Enthusiasm and Silence: Polish
Catholic Theologians and the Jews 153
Index 167
Bibliography 169