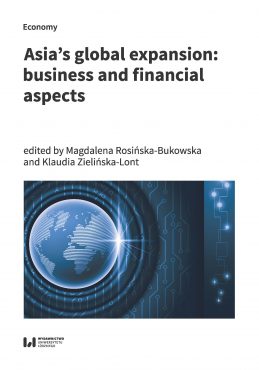 The concept of this monograph is focused on an analysis of the prospects for improving the competitive position of Asian countries in the global economy. The authors argue that a comprehensive analysis of Asia’s economic development requires studying its business and financial aspects in parallel. The authors of the monography concentrate on the chosen business aspects of Asia’s expansion, such as: trade and value chain development, Asian transnational corporations, international mergers and acquisitions, growth potential of energy industry, GDP growth model.

The unique nature of the studies conducted for this book stems from their wide thematic and geographical scope. Consequently, both business and financial features of economic growth are analysed. This approach is further used to study the financial aspects of China’s development in a related book prepared by the authors from the same Department: China’s economic growth: selected financial aspects.

According to the opinion expressed by the reviewer the following monograph constitutes a valuable contribution to the discussion concerning the new role of Asian economies in the world. It is recommended to scientists, students and journalist who study the problems of Asia’s economic development and its role in the global economy. The results can be also useful to companies interested in developing their business activities in the countries of the region.

Chapter 4. The role of energy sector in the development of the Chinese economy (Tomasz Motowidlak) 73
4.1. Primary energy consumption as a determinant of China’s economic growth 74
4.2. Electricity consumption as a determinant of the development of China’s economy 77
4.3. Side effects of China’s economic growth 79
4.4. Fuel conditioning of electricity generation in China 80
4.5. New priorities in China’s power industry 82
4.6. Development of technologies and innovative solutions in China’s power industry 83
4.7. China’s capital expansion as a form of acquiring modern energy technologies 85
Conclusions 86